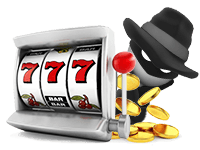 Since slots have been around, there have been all kinds of ways to cheat the machine. With millions of dollars ripening in the various jackpots, it’s easy to understand why so many people try to take advantage of the system.

These fun games can make up to 85% of casinos revenue so these establishments are always on the lookout for cheaters, and you definitely do not want to get caught. If that should happen, you can end up spending time in jail, with massive fines and be added to the infamous “Black Book”. Even so, through thick and thin, slots cheaters have deemed these risks as being worth it.

The easiest and most difficult slots to cheat

Slot machines that are mechanical and electro-mechanically run are the easiest to cheat. This is because they operate on pulleys and gears which can be controlled by certain gadgets. Unfortunately, for the cheaters, these machines are not easy to come by. If you do happen to stumble upon them, you can count on a plethora of security cameras watching your every move.

Today the modern machines are not easy to break. The casinos and slot manufacturers aim to be a step ahead of the players and any potential methods of cheating. Similar to software companies hiring hackers, many of casinos hire cheaters after they’ve done their time in prison. After all, they’re good at what they did in the past and they most certainly know where to find the weak spots.

Cheating at slots online is nearly impossible. Not only will the casino have your money if you did manage to find a way to cheat, but there is no physical machine you can actually manipulate. This has led to people making an attempt to cheat online using the sign-up bonuses which has resulted in special terms and conditions for the use of the bonus before any winnings can be paid. That said, unless you have direct access to the inner workings of the computer software, breaking into the online slots and winning big is just pretty much impossible.

There are all sorts of interesting, albeit creative, ways to cheat traditional slot machines. Most of the time, when a person is trying to devise a way to trick the machine, they own one and use it to test their device. Using try and fail methods, they eventually come up with some sort of gadget that works.

The Monkey's Paw, a device created by Tommy Glenn Carmichael, was essentially a guitar or piano string attached to a bent metal rod. It would be jammed into the machine through an air vent and then swiped around for the switch that released the coins. After the switch was flicked, coins would spit out. Carmichael claimed to be “winning” up to C$1000 an hour.

Other means to cheat at slots was counterfeit coins, shaved coins, mini lights to block optical sensors, coat hangers and bill validators. There’s even a trick which a string was tied to a coin and then placed into the machine until it registered a payment. The coin would be yanked out and repeated. This yo-yo’ing cheat was even performed by Donald Duck’s nephew in the popular cartoon.

A natural glitch in the machine

Other more lucky cheaters were able to find natural glitches in the slot machines software. It’s not easy to stumble upon such a glitch, but can happen. Take for example ‘The Game King’ video poker machine. One of the most popular in Vegas, it had a glitch that made some clever fellows very rich. Although complicated, the player would play the machine with small bets until they win a somewhat big payout. Then they immediately play a new game on the same machine until then win any hand. The double up screen will flash and now the glitch is taken advantage of. The player puts more money into the machine and then switches back to the first game. The stakes are upped to the highest amount, they cashout and their original winnings have been significantly multiplied. The guys who discovered this trick were charged with hacking, but eventually these charges were dropped.

A Real Life inside Job

Ronald Dale Harris was a software engineer for the Nevada Gaming Commission. His job was to program the computer chips for slot machines. These chips not only prevented tampering from cheaters, but also calculated payouts. Using his skills, he programmed his own code into over 30 machines in the state of Nevada.

He was good at what he did. His own secret code made it so when a player inserted a certain combination of coins into the machine it would automatically payout (ex. 2 coins, hold, 5 coins, hold, 3 coins). Staying behind the line, he would have accomplices play the combination into these machines and reap the huge winnings.

He actually wasn’t caught until his partner won C$100,000 on a game of Keno. Harris had info about the RNG used in Keno and its source code. He calculated what numbers would hit and gave them to his friend. The C$100,000 jackpot was the largest in history; naturally investigators were looking into it. Harris was discovered and sentenced to 7 years in prison, where he served only 2.

The challenge continues to grow

Today, slot machines are programmed to run on computer circuits which are pretty difficult to manipulate. Even so, there are cheaters working on this beating these programs; some are going to extreme lengths to change out computer chips bought on the black market. At the same time, manufacturers are becoming wiser to the game and cheaters are getting sanctioned with criminal offenses.

The future of cheating

The future of slots lies in hi-tech computer technology and more virtual aspects to the game (which will be really neat). With that will become more complicated, evolved ways to cheat. But trust us, right now there is someone in the world working on breaking them.

All in all, we cannot recommend you trying this method to win cash, no matter how much the amount. Instead, be entertained by the stories and leave it at that.

MORE SLOTS-RELATED TOPICS FOR YOU!